From the past the nature of light has been studied by many scientists. Some scientists believed that light had a wave nature as others defended the particle nature of light. For the first time Rene Descartes represented the wave theory which introduces the light as a disturbance in the world substance. Although Pierre Gassendi was the first scientist who believe in particle nature of light, but when this theory was followed by Isaac Newton it was developed. Robert Hooke and Christian Huygens are the next most famous scientists that believed in the wave theory of light. After about one century, the double-slit experiment of Thomas Young derived evidence that could be explained only if we know the light as a wave. One century later, Max Planck formulated his idea of the emission of light to solve the problem of thermal equilibrium of an absolutely black body. He found that the energy of light should be quanta and his Experiments shows the energy formula of each packet which called photon is hϑ.

The photoelectric effect is the other important experiment that has two points; proves the quantity of energy in one hand and shows particle nature of light on the other hand. A big difficulty appeared; the light must be a wave to explain the double-slit experiment of Thomas Young and simultaneously must be a particle to explain the photoelectric effect.

Einstein defined a pocket of energy with zero rest mass (photon) and explained the both double-slit experiment and the photoelectric effect. On the other hand it seems, Einstein himself did not accept wave-particle duality and knew that as only a temporary way out. But because of the prestige of Einstein, only a few scientists have investigated the possibility of a non-zero rest mass of the photon with few results.

In this article, we present a new proof of wave-particle duality of the light at anytime, anywhere and in any case. Consider a particle that is separated from a moving source. The motion of the particle is always affected by the movement of its source. Now notice how the electrons move in an atom. In this situation, the electron has two kinds of motion, moving around itself and around the nucleus of the atom. Like the Earth that rotates around itself and simultaneously orbits around the sun. But based on Saleh Theory’s definition of electrons, there is a difference with the given example; Electron, unlike the Earth, is not a solid object. The electron is a spherical shell consisted of a large number of non-zero rest mass photons. 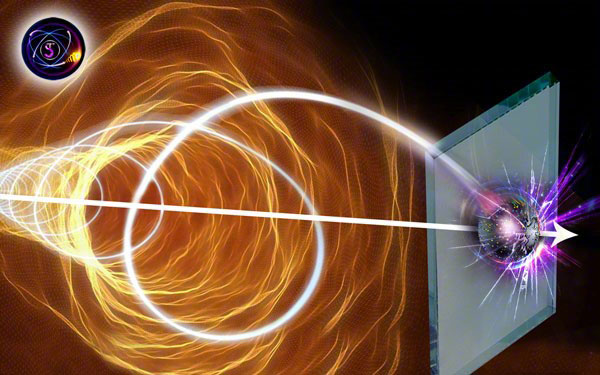 In Saleh Theory, since the photon has a projectile and impulsive motion, it is a particle. On the other hand, as it has a rotational motion, it behaves wavelike. In other words, on the true nature of the photon, we can say:

The photon at anytime, anywhere and in any case, is a particle that traverses like a wave.