The ancients believed that the world is made up of four elements: fire, air, water and earth. Over time, with the progress of science, scientists discovered that every material is composed of tiny particles called molecules which, themselves, are constituted of atoms. Similarly, atoms have a nucleus and electrons.

If we look at the sky, we see the moon that revolves around the Earth; together, they turn around the Sun. And if you lift your head a little higher, you could see the planets of the Solar System which also turn around the Sun which, in turn, has its rotation in the galaxy; as well as galaxies have their own axis to turn around. Thus, observing from the sky to the atom, we see an identical structure that is about a rotation around a central axis; a structure similar to that of the atom which has a nucleus and electrons rotating around.

Saleh Theory explains that, like the atom, the photon also has a central part around which particles are rotating and, indeed, the photon is a small atom with a similar constitution. As we see in the image, Saleh Theory based on the same scheme, believes that:

The photon has a central part around which the rotating particles move in an irregular manner. The central part called “Cidtone” and the particles around are the “Saleh Particles”. 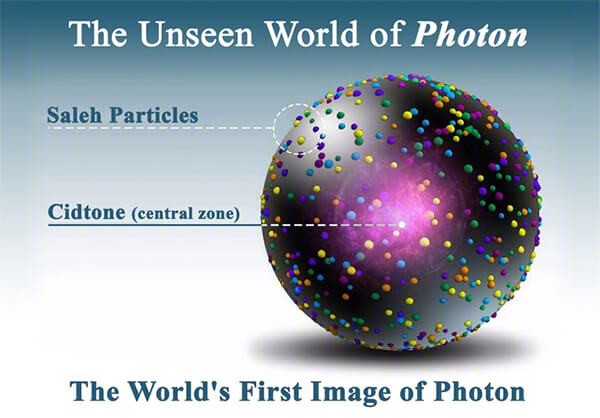