When a perfect and skillful mason builds a fortress by placing the similar blocks on each other, one by one, and completing the wall, the ceiling and finally the room, or when the ancient buildings in all their splendor are made up of the adobes, all the Universe is also built of separate adobes.

In the material world too, similar to the stone blocks of the pyramids of Egyptian necropolis, the elements and atoms that are the basis of all matter, themselves are made up of the hydrogen atom. Indeed, it is this noble element which is the sole basis and block of all other elements. As well as 75% of the Universe is made up of hydrogen.

Every existence is included in a certain array. If one looks at the periodic table of elements, one could consider that the helium is made of two hydrogens; together they make the lithium and it is the same for the rest of the elements. So all are just an array of hydrogen or the hydrogen is the as the primary building block.

The hydrogen atom in its different isotopes always has only one electron and one proton. Electron itself is only an array of "angel-photon" gathered on an imaginary sphere, one next to the other. So photon is like the primary building block of electron. 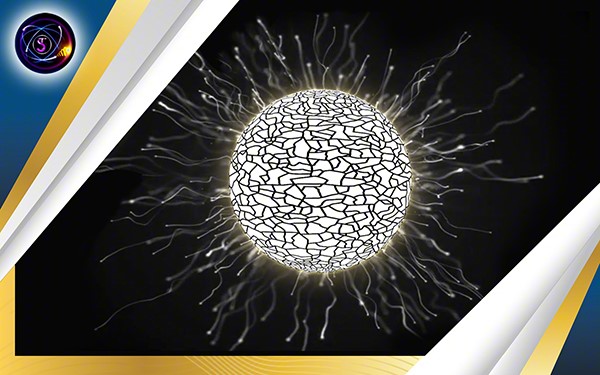 Saleh Theory believes that if photons are also at the origin of the proton constitution. In fact, united and compressed, they form a nucleus called proton like a filled globe.

Although the number of photons in the structure of proton is much more than that of an electron, the value of its radius is much lower than that of electron. Indeed, if we observe the proton well, we see a sun that is made up of millions of photon, compacted and compressed:

As we have seen in the preceding articles, the photon simultaneously has two movements: a rotation about an imaginary axis and a rectilinear advance which define a gyroradius and a frequency which themselves cause the color variety of photon. The same photon has as its gentrix the electron on the surface of which it is in rotation. And finally, when these innumerable photons come together and compress in a sphere, they form the proton.