The studies of scientists including Maxwell in the field of electromagnetism showed that visible light is just a tiny part of a larger radiant spectrum. Scientists have been studying hard to find out how the light travels from the light source to our eyes. Some believed that it would probably move in the form of a wave but the others thought that light was actually composed of particles that move in space.

Isaac Newton, based on his experiments liked the second theory. But Newton's theory was rejected later. To his theory’s rejection, one of the most famous experiments is the one performed by Thomas Young in 1801.

In the second half of the nineteenth century, physicists studied why some materials absorb and emit electromagnetic radiation better than some other materials. In 1900, Max Planck proposed the theory of quantum energy that could justify one of the problems of physicists of that time. He explained the relationship between black body temperature and the amount of electromagnetic radiation.

It was true that the photoelectric effect experiment confirmed Planck's quantum theory but created a new problem in the wave theory of light. This experiment can only be justified by considering the light as a particle. A few years later, Einstein for explaining the photoelectric experiment, presented the concept of "wave-particle duality of light".

In this article, we will present a new explanation to describe the nature of photon motion. A new and novel theory which describes the behavior of light and photon motion perfectly and explains particle-like and wave-like behaviors of light at the same time and solves the wave-particle duality paradox.

Saleh Theory believes that photon is a particle with a constant mass that traverses in a helical trajectory. It means that a photon that is thrown out from an excited electron, in addition to linear-forward motion with light speed, also spins around an assumed axis. In other words, the photon has a three-dimensional motion, including a transition movement and a rotary motion. Therefore, its energy is the result of a combination of two types of motion. In Saleh Theory, the energy of wave-like part is the same as the energy that Max Planck has experimentally measured in the laboratory, and the Rotational kinetic energy is the energy of a rotational globe around its center ⚊12mr2ω2. But eventually, this photon with constant mass passes the distance between two points by linear velocity C, so its energy is equal to ⚊12mc2.

According to the explanations of how the photon is moving, the final formula for the energy of photon will be like this. In fact, it can be said that the photon Translational kinetic energy or in other words the light energy is equal to the initial energy of the photon, minus its rotational energy consumption.

In this equation for energy of photon ( light energy ) the first part is the energy of wave-like part, and the second one is Translational kinetic energy, and the third part refers to the rotating energy at a constant angular velocity, h is Planck constant ϑ is frequency, m is the photon mass, c is linear speed of photon, r is gyroradius and ω is angular velocity. 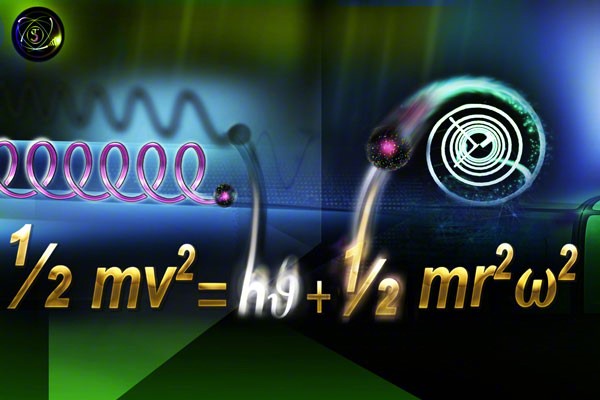 The important and interesting point in this new formula for the energy of photon is that the variables are homogeneous. As you know, for a wave with a constant velocity, the frequency is directly related to the inverse value of wavelength.

Therefore, the variations of both variables, the rotational radius, and the frequency, are the same kind of the length. 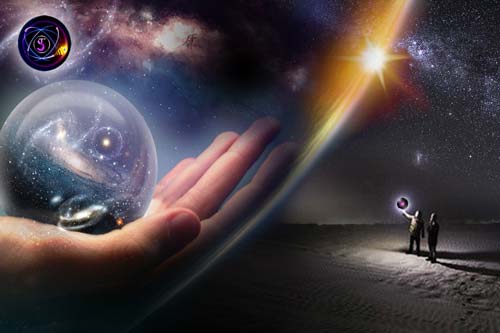 Saleh Theory believes that the Universe around us from macro to micro is composed of a tiny particle with constant rest mass, called Photon.