where “n” is the number of force lines passing through the surface of the planet.

Note: According to the calculated energy of the Photons, this is as follows:

As we said, “n” is the number of force lines passing through the surface of the sphere, so we have:

The value of the left side of the relation is constant as:

And finally the gravitational frequency will be equal to:

Based on the above equation, the amount of gravitational frequency calculated for the planets of the solar system should be as follows: 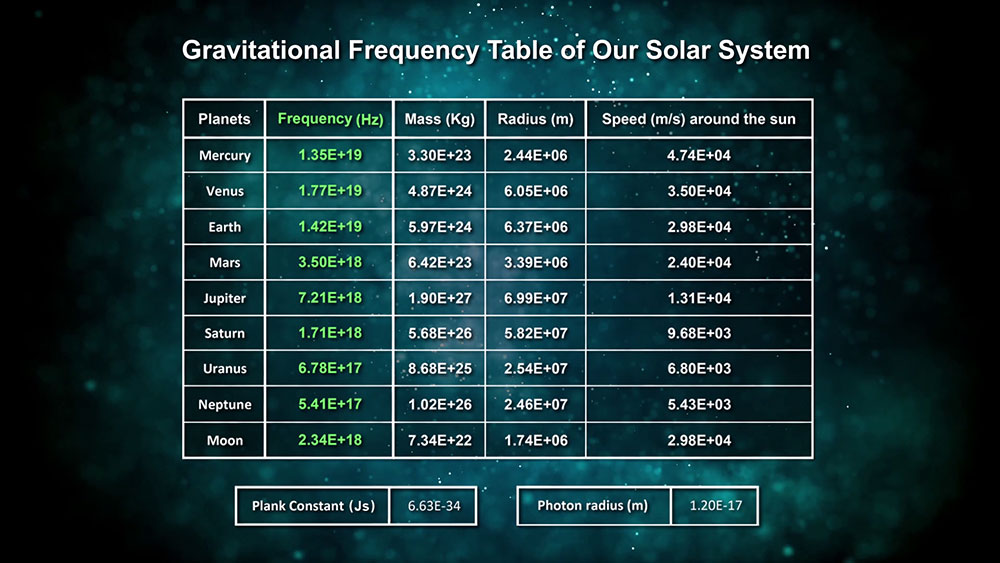 And according to the results, the position of gravitational waves in the electromagnetic waves spectrum will be as follows:

The planets have a strong, stable, and coordinated relationship with their suns in such a way that they travel without slight differences in their specific orbit and period (having differences shows inconsistency and irregularity).

For example, the number of fluxes that pass through the Earth is 1046. Regarding the size of the sun's surface relative to the earth, actually a set of 1046 force lines (gravitational fluxes) which passing through the earth, spins and goes to the sun and returns again.

As the nuclei of the suns are so compact and hot and the atomic structure cannot be imagined for it, therefore in the suns a bunch of photons with small external rotational motion are separated from the electrons. In fact, it can be said that the force lines or gravitational fluxes are a kind of continuous chain state of photons. 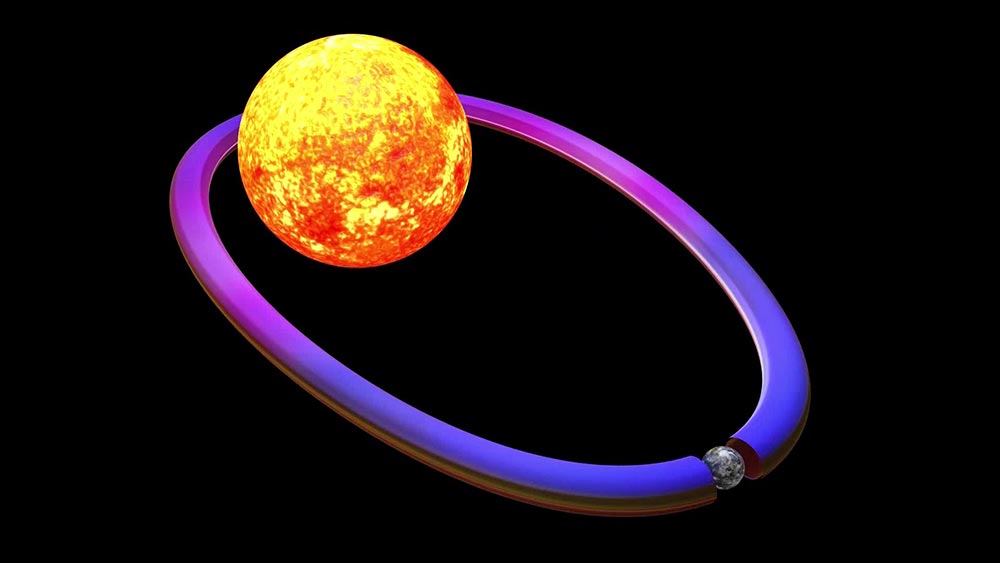 It should be noted that since the gravity extends throughout the whole universe and gravity between the suns and all objects in the universe is conceivable, so these force lines (gravitational fluxes) continue to the end of the universe.

The interesting thing about this model is that the gravitational fluxes pass through everything at the speed of light, they are invisible and the vertical effect along the flux is so strong and their flexibility in the perpendicular direction is very high. This means that it is inflexible in the direction of the line between the star and the planet but flexible in the perpendicular direction.

1046 is the number of photons that pass through the Earth's surface in an ideal condition. But due to the possible empty spaces between the fluxes, this number will be reduced to about 1045 . As a result, it can be said that in reality the gravitational frequency is less than this value. For example, the real gravitational frequency of the earth should be in order of 1018 to 1019Hz.

Given that there are the gravitational flux or force lines from the sun to all the planets and from each planet to the other planets and their moons, if we modulate our date on these force lines with intended frequency, we can exchange the data with the speed of light or even tens, hundreds and thousands of times of the light speed. Because the fluxes, force lines, have the property of continuity, and in the whole system and galaxy, the fluxes are related to each other and all the planets and stars are immersed in these fluxes. So that a network structure can be imagined.

As a result of this alive, continuous, and dynamic network, any planet can be a transmitter and another planet a receiver (in fact, the transmitter and receiver dish is in the size of a planet). In addition, a transmitter could be built on Earth that would emit these waves and cover the entire planet. It should be noted that the frequency is between stars and planets as well as planets and planets. So, they have a specific relative frequency to each other, which ranges from 1017Hz to 1020Hz.

Based on the above, it was shown that the kinetic energy produced by the gravity force is equivalent to the energy of N photons and the energy equations are as follows:

where, m is a very large mass (like the Earth) which, due to its equilibrium (between the Earth and the Sun, as they have a clear equilibrium), is associated with gravitational waves and has energy equal to energy of N photons.

• Energy of a single photon:

In the past, it has shown that the energy formula for a single photon is as follows:

According to the famous formula of nuclear energy, the equation will be:

Where n is the number of the resulting photons from the existing mass. In addition, during the explosion, radiant energy and gamma rays, etc. will release.

It is very clear that in a word, the amount of current that passes through a lamp is converted into light or photons, which in fact the energy formula of electrical energy are as follows:

Where, nˊ is the number of photons isolated from the lamp.

Notice: From the above equations, the following relation can be obtained:

the ratio “n” is the amount of photons in different objects. And since the amounts of energies are different from each other, the values of n vary (n, N, nˊ), but the form of the equations is the same. 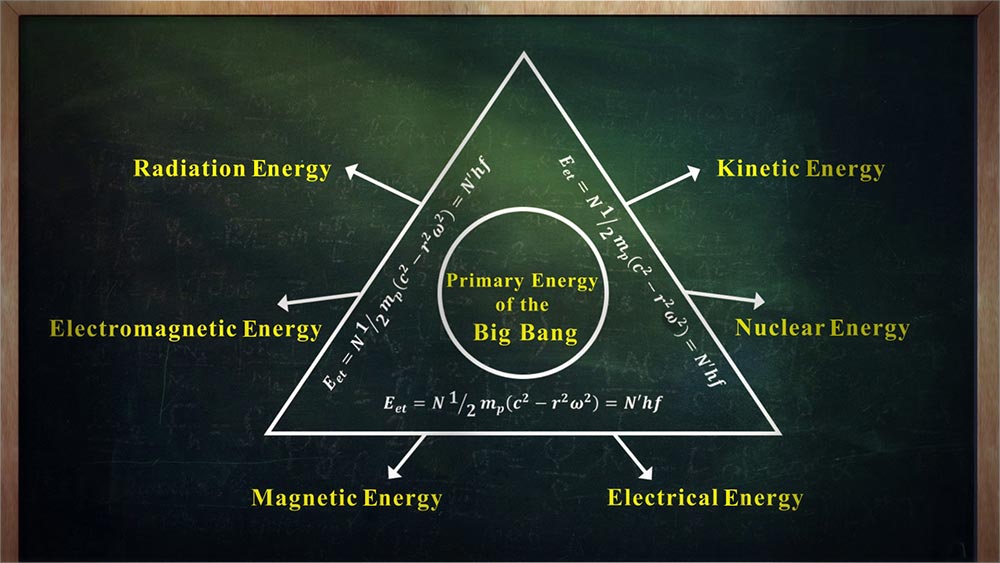 As the kinetic energy of the planets has the following relation with the gravitational energy:

It can be concluded that, according to the above relation, the passing energy through the unit of the earth's surface is as follows:

This is the amount of the energy passing through the earth’s surface by gravitational waves in one square meter. It should be noted that this energy is so large and efficient that if it can be used, affordable, clean, ubiquitous and permanent energy can be produced.

3. As the gravity waves have a strong and special network, if we create a same network, which is excited due to the passage of gravity network through this network we have a force that could create energy.

I. How could make a tool to use the gravitational waves for transferring data.

II. The solution for design and create the spacecraft that could use the gravity force and energy.

III. How could create gravity in spaceships, so its passengers have an Earthlike situation. 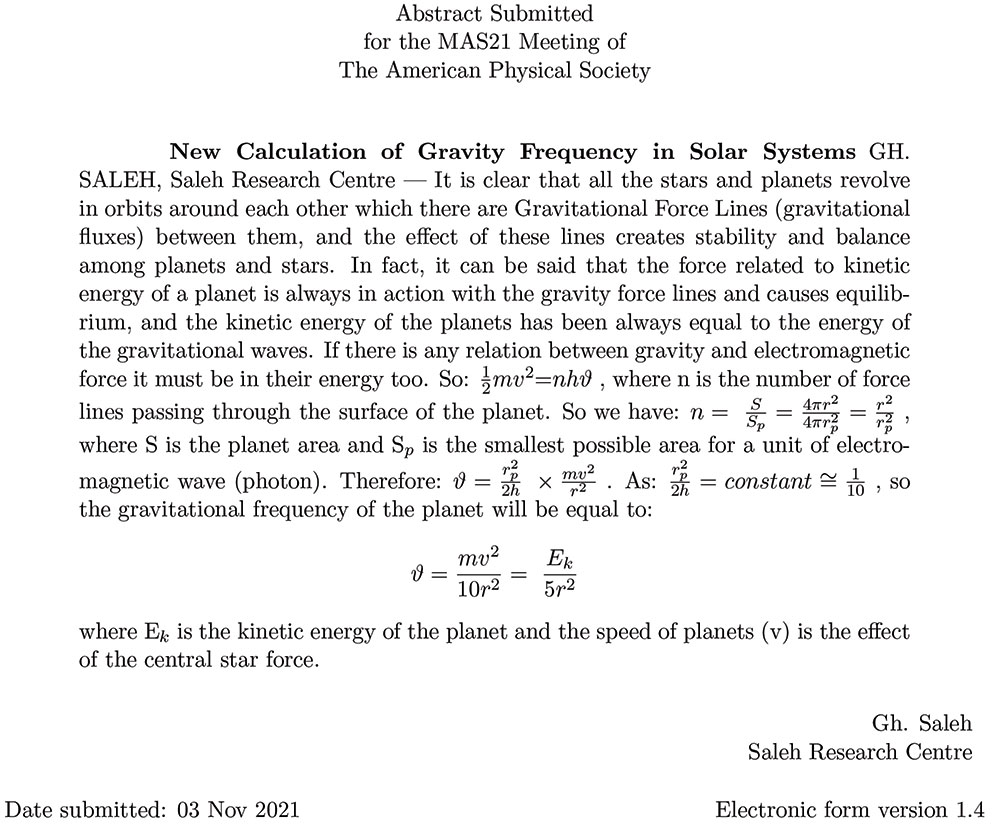 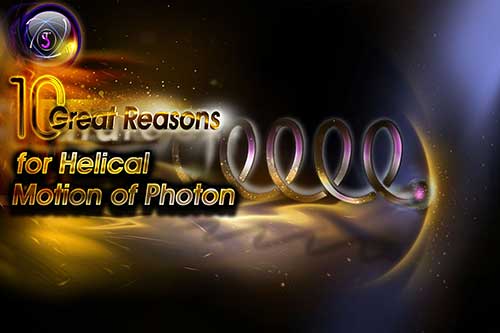 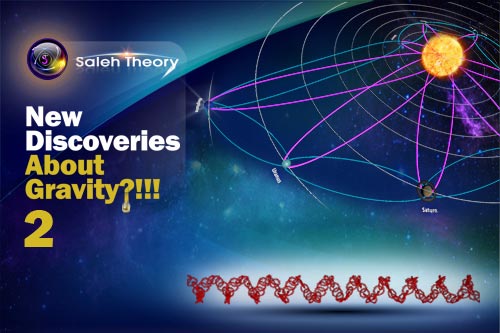 In the previous video we explained the nature of Gravitational Force Lines and their applications. In this video we will explain more detail about gravity and the relationship between celestial objects in the universe.